“Alive with Pleasure” more like the leading cause of avoidable DEATH 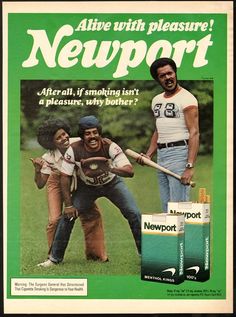 Cigarette smoking is the leading avoidable cause of death worldwide. Also, it raises a person’s risk of many common chronic diseases and conditions. For example.

The worst part is that these dangers exist even if you don’t smoke. Second-hand smoke, also known as passive smoking also places one at risk. Public health researchers are even discussing third-hand smoke, the residual tobacco smoke contamination that remains after the cigarette is extinguished. Tobacco smoke, be it; first, second or third hand contains more than 7,000 chemicals including known carcinogens, toxic metals, and poisonous gases

Lead: Once used in paints

The epigenetic influence of cigarette smoking is also something to consider. Epigenetics is the field that studies the biological mechanisms that turn genes on and off.  Lung cancer, chronic obstructive pulmonary disease (COPD), asthma, and cardiovascular disease are linked to epigenetic changes due to tobacco smoke. Some researchers believe that one DNA mutation is introduced into the genome for every 15 cigarettes smoked. Imagine the potential for genetic mutation and damage in someone who has smoked a pack a day for 20 years.  In fact, such a patient inspired this blog entry.   A couple of months ago, a 68 yr old patient presented with shortness of breath and fatigue upon exertion.  A review of his medical history exposed that he had smoked a pack a day for 20 years.  As fate would have it, he was in the beginning stages of COPD more specifically emphysema. Unfortunately, like many smokers who develop COPD, he believed that the damage was done and that any attempt to quit was futile. However, this is not the case, smoking cessation benefits all smokers, regardless of their age or how long they have smoked.

Schedule a free 10-minute consultation with Dr. Boyce today to learn more about how he can formulate a personalized smoking cessation protocol for you!